The project intended to explore a link between the mid-century architecture of Miami, of a modern matrix, and the tradition of modern Brazilian architecture. In the same way that modern architecture of European origin was originally interpreted in North America, there was an interpretation and recreation of that movement in South America. This bond is reinforced by Miami’s climatic and scenic attractions – a sunny place close to the tropical zone. We establish these links through the choice of pure geometric forms, especially the cylinder and the circle, which are recurrent in the history of local architecture and modern Brazilian architecture and also by the use of a pale color palette, close to white, another characteristic common to both traditions. An essential initial reference was the post office buildings in Miami, the works of the Brazilian sculptor Sergio Camargo, the brightness of David Hockney’s American swimming pools, or even contemporary projects that are also sensitive to these recurrences, such as the foundation Faena, by OMA, just opened in the city. 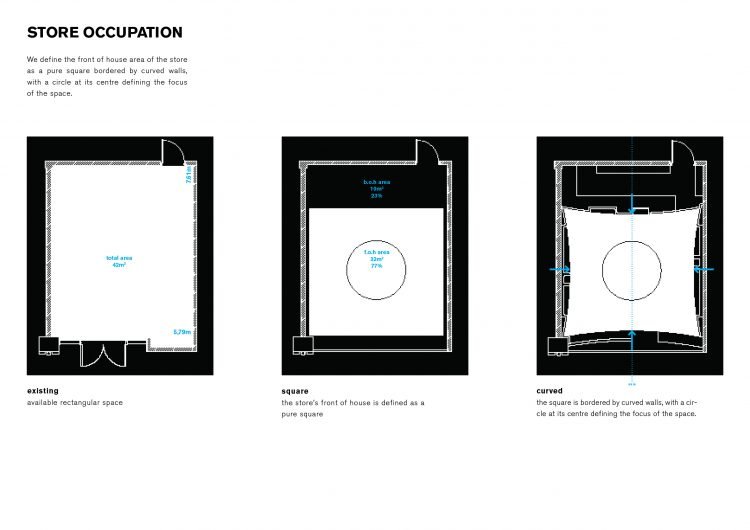 From these initial images, we decided to create a space that did not have right angles, constructed only by curved planes – cylinder segments – as if the environment were a connection gap between these preexisting volumes.

The location of the Miami Design District is a relatively new commercial venture, consisting of a wide range of design-related stores. The city of Miami has a strong connection to the Latin American universe, both with Spanish speakers and Portuguese speakers, due to the large number of Brazilian tourists who frequent it. That is why it makes sense for us to attempt to connect the two cultural universes through space and architecture.

The project has a reduced palette of materials, in similar color tones. They are materials of natural origin but processed industrially. Although they maintain the irregularity and roughness proper of natural materials it has the marks of work and industry. Concrete, polished plaster, terrazzo floor, in warm tones from gray to white. The intention is to maintain the formal purity of simple geometries with their smooth surfaces, but with imperfections, roughness and porosity, as if the environment were formed by large stones, very simple but with variations and nuances of texture and color. A recreated, controlled nature.

We avoid to the maximum the use of elements that refer to a domestic environment, such as furniture. We have eliminated the maximum amount of loose objects. The products are exhibited in recesses on the walls and not on shelves, the test/sink counter and the point of sales are the same material as the floor, as if they were natural outcrops and not self-contained objects. The lighting is also based on points of light installed in a recess in the plaster lining without apparent equipment. The vegetation emerges from holes in the façade element, without pots, or outstanding architectural supports.

The only exception is the design armchair by Lina Bo Bardi, an Italian architect who worked in Brazil in the second half of the last century and is an example of this successful mediation between European modernism and its tropical version, incorporating the harshness and rudeness of the craft processes of production with a thought connected with industrial production. Besides the appropriateness to the historical and conceptual context that serves as reference for the project, the chosen armchair is a semi-sphere upholstered on a very light metallic foot, reinforcing the formal repertoire of the other elements of the space, which avoids the right angles.